According to analysts, its revenue is going to skyrocket this year reaching $34 million compared to “only” $400,000 in 2016, what’s somewhat expected given the popularity of ETFMG  — around $386 million is “poured in the ETF through Tuesday.” The thing is that Cronos is ETFMG’s largest holding, followed by Aurora Cannabis Inc. from Vancouver and Ontario-based Canopy Growth Corp. which are the two biggest producers of medical marijuana. In addition, in 2017 their collective revenue was $44 million, while it is expected to climb to $446 million in 2019. 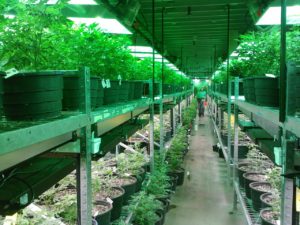 By now, you probably noticed that mentioned companies are all Canada-based, what comes as no surprise knowing that country is just months away from marijuana legalization. Moreover, access to the substance in this country is completely legal when it’s used for medical purposes. In addition, the U.S. is following its neighbor’s footsteps since 29 states already allow medical use of marijuana, while nine states and Washington D.C. allow recreational use.

So, why the investors are so fired up?

Firstly, unlike investing in other growth stocks that are usually a risky venture, being new and unproven technologies, the cannabis is already used in medical (recreational) purposes, and it’s proven to be beneficial (in both cases). So, it works, and more importantly, it’s widely “embraced” in the U.S., as evidenced by Gallup survey regarding the usage of marijuana. Apparently, one in eight Americans smoked pot, while 45% said they had tried it. Moreover, 64% of Americans are not having anything against legalization of marijuana. Also, the biggest supporters are members of Generation X and Millennials. So, it’s only logical for investors to expect pot stocks to grow in the future.

Secondly, the regulations and its effect on profits are not something unfamiliar, since there are existing drug regulations, and investors can see the possible scenarios and outcomes when it comes to the pot market.

However, the only problem is that right now investing in/ buying marijuana stocks might not be a good bargain, since the price-to-book ratio of companies mentioned above is 11.6 what’s six times the S&P/Toronto Stock Exchange Composite Index’s P/B ratio. The situation is not much different when it comes to the average price-to-sales ratio and price-to-earnings ratios. Apparently, this train has left the station at least for U.S. investors, since pot stocks are now considered expensive even comparing to other growth stocks. Luckily, there are around 30 countries worldwide that allow medical use of marijuana, and it’s only a matter of time when the same is going to happen there. So it seems like there’s a chance for some smart investing abroad.

The bottom line is that investor’ valuations are sky-high, what can be a potential burden to marijuana companies. Not only do they have to struggle with turning revenue into profit, but also to compete with new entrants. Of course, the companies simply have to show excellent performance, since investors are there to make money from their valuations.